A creative student has won the school’s Words and Images United competition with her manga inspired graphic novel. 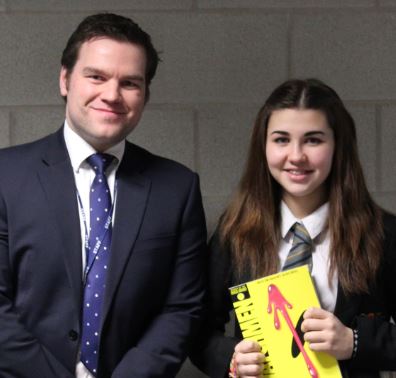 A creative student has won the school’s Words and Images United competition with her manga inspired graphic novel.

The competition was organised by Director of English Markus Wilson to encourage our students to draw links between literacy and art.

Mr Wilson said: “Romy’s entry won because it fully united images and words to tell a short story that was very moving. Not only that but the story was original and the artwork was fantastic.”

In order for students to see the winning entry, Romy’s novel was converted into a three-minute animated video by Mr Wilson who then showed it to all CTS students during his literacy assembly.

He said: “I really wanted all the students to see the work Romy had put into her entry and the best way to do that was to scan each image and convert it into a video sequence that could then be added to music. It took about three hours of editing but the final result is really pleasing.”

The competition also received a number of other notable submissions, including entries from Darnel, Christabel and Kara.

Romy received a copy of Watchmen by Northampton’s Alan Moore as a prize.

To see the animated video of Romy’s work click here

(Romy is pictured with Mr Wilson and her prize)