Our students exhibited their engineering design projects alongside some of the UK’s most inspirational scientists and engineers at the Big Bang Fair. 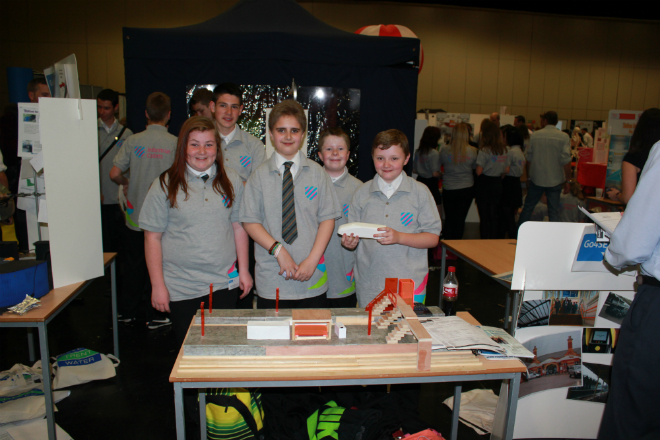 Our students exhibited their engineering design projects alongside some of the UK’s most inspirational scientists and engineers at the Big Bang Fair.

The event at Coventry’s Ricoh Arena was designed to inspire young people to study science, technology, engineering and mathematics.

Two teams of our Year 8 students exhibited their Go4Set projects which involved plans for an eco-classroom and designs to improve Kettering Train Station.

Design and Technology Teacher Nigel Barrett said: “There must have been about 80 teams of students showing off their projects – it was quite exciting.

“Most of the students who were exhibiting there were in Year 9 so we were at the younger end of the scale but we definitely held our own.

“Our projects were highly commended by the judges who thought our students' confidence and teamwork were exemplary.”

During the fair all our Go4Set students were presented with their Bronze Industrial Cadets certificate which is a new award launched by Prince Charles.

CTS Director of Science Victoria Khan took along another group of Year 7 and 8 students to look around the fair.

She said: “The fair celebrated students’ work and inspired them by showing how companies apply the subjects our students are learning to real life situations.

“The students were interested in the Severn Trent Water displays about filtration, processing water and about how they deal with pollution and ensure habitats are not damaged during the collection of water.

“The students also talked to astrophysicists from Leicester University who designed the Mars Rover and who showed them actual pieces of Mars and the Moon.

“They saw demonstrations by sports engineers from Loughborough University who are involved in designing the next World Cup football which has a thicker skin and is much grippier.

“All the students were really impressed and inspired by what they saw.”

Year 7 student Lucy visited the fair and took part in an engineering project.

She said: “We were challenged to make a tunnel through a massive box of sand.

“We dug into the sand and used our hands as stakes until we could slide in supports.

“Our design worked and we managed to make the tunnel without it collapsing.”

Fellow Year 7 student Kristina added: “I really enjoyed the fair. I found it very inspiring and I would like to go again.”