Some of our brightest young scientists met the engineers who are creating a car which they hope will break the 1,000mph barrier and set a new world land speed record. 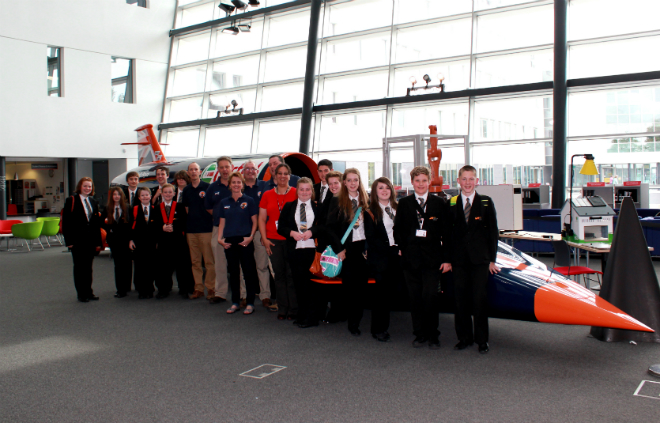 Some of our brightest young scientists met the engineers who are creating a car which they hope will break the 1,000mph barrier and set a new world land speed record.

A group of science students from Year 8 visited Walsall University to meet the people behind the Bloodhound SSC project.

The engineers are the same people who designed the Thrust SSC Project which set the first Supersonic World Land Speed Record.

CTS Director of Science Victoria Khan said: “Our students were set a number of tasks during the visit.

“The landspeed record attempt will take place on a 12 mile stretch of a dry river bed on South Africa’s border with Namibia which is 150 miles away from the nearest town.

“All those involved with the project will live there for four months and our students were challenged to come up with a logistical plan for all the things the team would need to take with them to survive out there for that period of time.

“They looked at things like a renewable energy plant, medical facilities, communications and food supplies.

“As well as looking after the 40 members of staff behind Bloodhound SSC the students also had to consider the needs of the 500 members of the press who would be there for the record attempt.

“The SSC will also only carry enough fuel for the run so they needed to think about where they would get fuel from.”

Our students were also challenged to make a rocket car from Meccano.

One of our girls’ team covered 12 metres in 1.27 seconds during the practice run but in the actual run just missed out on the top spot with a time of 1.47 seconds.

Our team which was made up of Ollie and Scott won with a time of 1.40 seconds.

Our students’ rocket cars were the fastest out of all the rocket cars created by all the schools which took part on the day.

During the visit the engineers also talked to our students about designing the car, its aerodynamics and how they keep the driver cool in the cockpit of the car so he will not overheat and die.

The students who went on the trip included Dmitrijs, Alice, Natalie and Jake.

Jake, who hopes to be a structural engineer when he is older, said: “I was really interested to learn about the aerodynamics of the car and I enjoyed using the 3-D printer.

“It was great to see the cutting edge of engineering and I think the visit opened our eyes to what engineering can achieve.”

Dmitrijs said: “The Bloodhound SSC is the perfect car. The visit was really interesting and I learned a lot.”

Alice said: “I liked find out about the engineering behind the car. It was surprising to learn about all the little bits that go into making it.”

Natalie added: “My favourite parts were designing the area where the engineers would be living for four months during the record attempt and making the rocket cars.

“The car which I designed with Alice travelled 12 metres in 1.27 seconds which was very exciting. It was a shame we didn’t win but we were really pleased that our design was good.”

The engineers plan to do a test run of the vehicle in 2015 and will make the record attempt in 2016.

(Pictured above are our students with a model of the car)