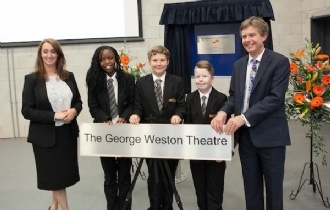 Corby Technical School has today been officially opened by a leading figure of British industry. 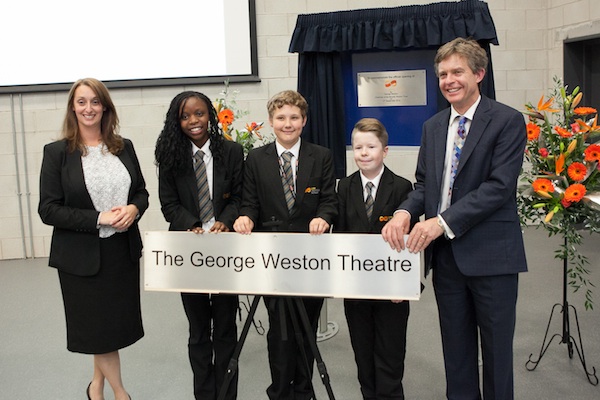 Chair of the Brooke Weston Trust, George Weston, undertook the ceremonial duties to declare our school officially open this morning.

Staff, students and invited guests gathered as the Trust’s Chairman unveiled a commemorative plaque to celebrate the £6m state of the art building in Cottingham Road.

Mr Weston is the Chief Executive of Associated British Foods, which employs more than 100,000 people in 47 countries and includes well-known names, including Twinings, Primark, Ovaltine, The Silver Spoon Company, Jordans Ryvita and Kingsmill.

After performing the opening honours he said: “I would particularly like to thank all those people involved, especially parents, for the chance they took with us, as parents did with the Brooke Weston Academy when it opened back in 1991.

“I would like to thank all the trustees and governors, Northamptonshire County Council, who gave us the land and to Corby Borough Council for having the faith in the Brooke Weston Trust.”

He added: “I am very proud of all that the Principal Angela Reynolds and the team have achieved and has been a great journey from when the school first started in 2012.

“It is a fantastic to see it achieving the Outstanding Ofsted such a short time after opening, which is testament to everyone involved.”

As part of the ceremony a video of the school’s journey so far was shown and Year 9 student Aaron Tamplin also made a speech.

Principal Angela Reynolds said: “This year has been an incredibly exciting time for us. We have moved into our new building and received Ofsted’s highest accolade when it ranked our school as Outstanding.

“I am incredibly proud of all our students and staff and the official opening was a wonderful occasion which gave us the opportunity to celebrate our achievements.

“We were delighted that George Weston was able to officially open the school and that so many distinguished members of our community were able to join us for the event.”

After the opening, guests were given a tour of the school before being treated to refreshments.