Our Year 10 students beat off stiff competition from Sixth Formers to win two trophies at the Rotary Technology Tournament 2016.

Our Year 10 students beat off stiff competition from Sixth Formers to win two trophies at the Rotary Technology Tournament 2016.

The prestigious event is organised every year by Rotary Nene Valley to give secondary school students from across the county the chance to compete against one another in a tournament which tests their technological skills.

This year our Year 10 team Vulcan I8 won the intermediate section of the competition and beat Sixth Formers from other schools to be named the overall winners on the contest and the recipients of the University of Northampton trophy.

CTS Design and Technology Teacher David Harley said: “We are very proud of our Year 10 students. They did incredibly well to win their age group but to go on to win the overall competition, where they beat much older students, was fantastic.

“They have each received a £25 voucher and won a silver cup and a glass trophy for the school.”

(Our students are pictured above with the University of Northampton trophy and below with the cup for winning their age group. The pictures were provided, with permission, from the Rotary Nene Valley website - www.rotarynenevalley.org.uk) 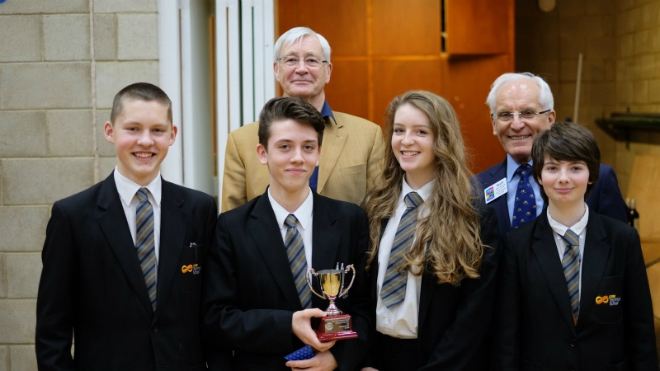