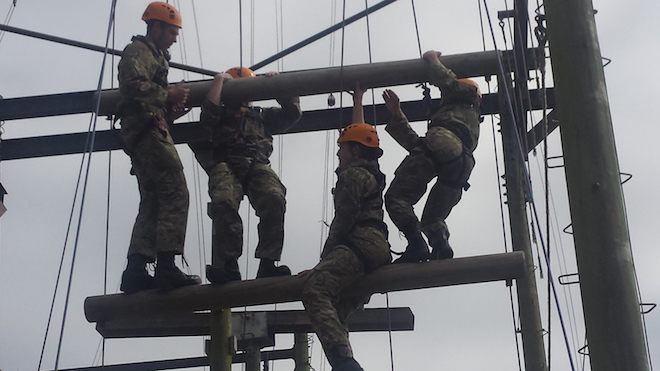 Six students from Corby Technical School and three students from Kettering Science Academy represented our CCF at the prestigious event that was held at Welbeck Defence Sixth Form College near Loughborough at the weekend.

The event introduced the cadets to challenging activities that tested their leadership skills, teamwork skills and ability to think under pressure and showed them the opportunities available at Welbeck DSFC.

During the event the cadets worked on a rocket car challenge with the Thrust team that is attempting to build a car that can travel at 1,000mph and with British Aerospace representatives on a satellite challenge.

Nigel Barrett, who serves as a 2nd Lieutenant with the Trust’s CCF, said: “It was our first time at this event and we definitely want to go again.

“It was inspiring for the cadets to work with the Thrust team and people from British Aerospace and to see the amazing facilities at Welbeck.

“All our cadets worked so well together and forged even stronger relationships with one another.

“They were fantastic ambassadors for the Trust and our CCF.”

The cadets also took part in a bridge building challenge, an orienteering challenge, a first aid exercise and took on a high ropes confidence course.

During their stay the cadets camped in the grounds of Welbeck DSFC.

The event was attended by nearly 20 teams of cadets from across the country.

To see more pictures from the weekend click here