04-05 Any Questions? is broadcast from CTS

A range of issues from the future of British steel production to the EU referendum were debated live on BBC Radio 4 at Corby Technical School. 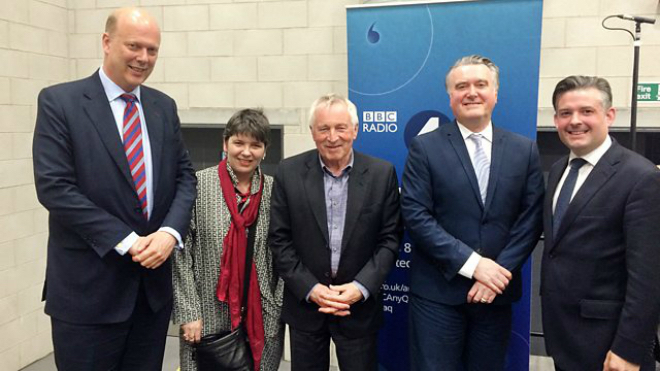 A range of issues from the future of British steel production to the EU referendum were debated live on BBC Radio 4 at Corby Technical School.

Our school hosted Radio 4’s prestigious Any Questions? show on Friday evening to give the community the chance to question leading politicians and thinkers on current affairs.

The show featured its popular presenter Jonathan Dimbleby and the panel was made up of the Leader of the House of Commons Chris Grayling, Shadow Cabinet Minister Jon Ashworth, Institute of Ideas Director Claire Fox and SNP MP and former television presenter John Nicolson.

Any Questions? Producer Lisa Jenkinson said: "We were really impressed with how organised everything was at the school, from when we arrived, to getting the programme on air for a live show.

“A lot of the hard work goes on beforehand - particularly in getting the audience together - and that's all down to the hard work of the school.

“It was nice to meet so many friendly students as well. They were invaluable as runners in the run-up to the show at 8pm.

“We had a good range of questions on issues as varied as breastfeeding to the future of steel in Britain and the EU referendum.

“Some week's we don't always get the range of issues or the quality of wording but that wasn't the case in Corby on Friday.

“One question I really wanted to do, but unfortunately we ran out of time, was question 5 about English identity. It would've been great with a Scot on the panel to hear that debated, but it wasn't to be!"

Corby Technical School Principal Angela Reynolds added: “We were delighted to host this event for the people of Corby.

“There were some great questions from the audience which made for an interesting debate.

“We were also very proud of our students who greeted our visitors on the night. They were fantastic ambassadors for our school and we were touched that several audience members took the time after the show to comment on how they impressed they were with our students.”