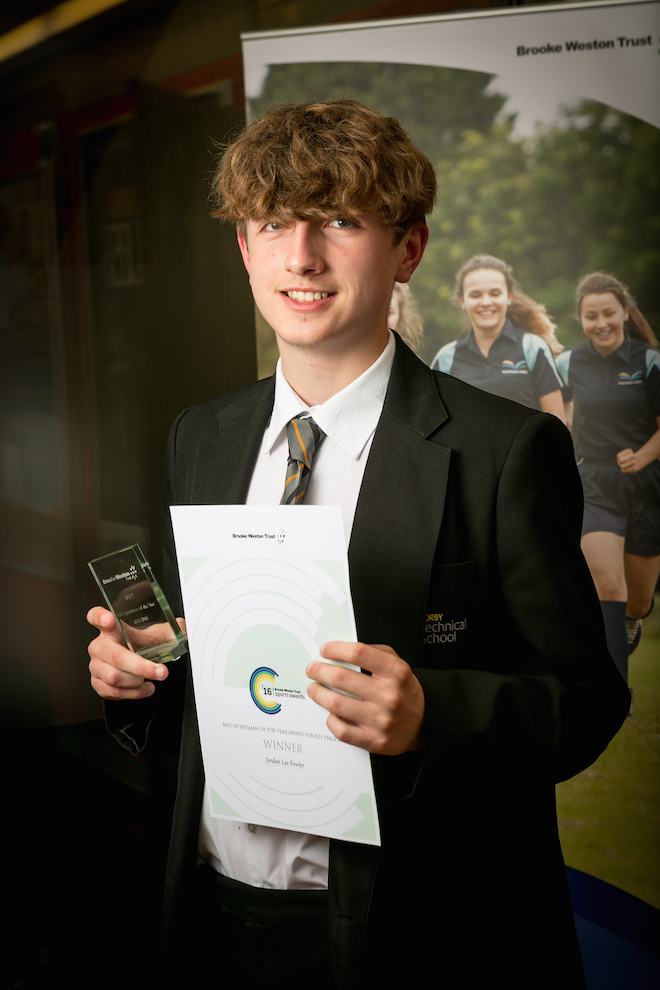 Jordan Lee Fowler (pictured above) triumphed at the inaugural awards which were held on Friday night (May 6th) at the Core Theatre in Corby.

Hundreds of students and parents from the ten BWT schools attended the awards ceremony in which young people from Key Stage 2 to Key Stage 4 were recognised for their commitment.

Jordan won for his fantastic sporting skills and achivements.

The nomination said: “Jordan captained the school football team and played for the basketball team. A fantastic all round sportsman especially football where he is an elite performer. He was the player of the season for both football and basketball and top point scorer for basketball. Jordan will always put the team ahead of personal glory. He’s a true leader.”

BWT Director of Sport Kirstie Smith said: “It was a great evening and a real celebration of the sport that happens across our Trust of ten schools.

“As a Trust we recognise the importance of sport in young people’s lives and what it does to enhance well being, build confidence and teach team skills.”

During the evening all nominees were invited onto the stage and the audience were told about their sporting achievements.

There were also messages of support and congratulation from the stars from the world of England Rugby and BMxer Mike Mullen demonstrated a trick with CTS Executive Principal John Henrys.

Dance troupes from Corby Business Academy and Thomas Clarkson Academy also performed and throughout the evening the BWT Sports Ambassadors assisted with duties, helping students and parents to their seats and providing support to the awards organisation team.

Below is a list of all the Trust's Sports Awards winners.

BWT Sportswoman of the Year Award

BWT Sportsman of the Year Award

BWT Team of the Year Award