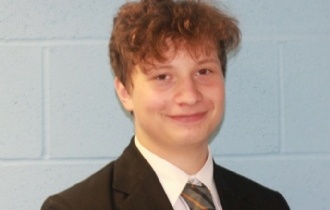 He normally plays with Kettering RFC and they flagged up the opportunity to try out for the Saints. He said ‘I thought I might as well go for it for the experience but I didn’t think I would get picked as I felt that I had not been playing for long enough.

‘A week later, when I was a bit down and felt like I wasn’t improving my rugby, my Dad said “That’s why you are on the Saints DPP then is it?” I couldn’t believe it and he said all the dads and coaches were talking about it!’

Zac started off playing rugby at school, then for Stuart and Lloyds RFC before deciding to join the more advanced team at Kettering. He now plays in second row and, after three and a half years of playing the sport, he is about to join their Colts team

He said  ‘I couldn’t play football, I’ve got two left feet and I am not very good at basketball. My dad suggested I tried rugby.’

Zac has already had his first training session for the East Midlands Saints DPP and soon the most improved and players with greatest potential will be selected for their U16 team.

He said ‘I never thought I would get this far in rugby and initially only took up the sport to get fit. I then found out I am on the Saints DDP. It was really unexpected and exciting; I really want to make the team. I love rugby as it is so full on and we all help and rely on one another. My dream is to be a professional rugby player or join the Army.’