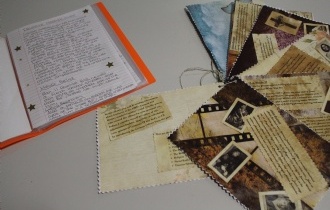 The students had four weeks to create a visual album about Germany, Switzerland or Austria which consisted of 8-10 categories such as food, sport, fashion etc.

Director of Modern Foreign Languages Mrs Wagner-lees said ‘The students has two lessons to start the project and then they used homework time to complete the rest of the album.

‘The project was completely self-led by the students who had to choose everything themselves from the topics they wanted to research to buying the album, laying it out and managing their time. The cross-curriculum project allowed the students to bring a range of subjects together with modern foreign languages, such as art, history, religion, geography, science and English, depending on which topics the students decided to research. Some students produced work on Albert Einstein, the Berlin wall, Hitler and a few even created helpful word glossaries.

‘I am very proud of all the students that have completed the project, the standard of work being produced has exceeded my expectations and I am hoping to run the project every year.’

Year 10 student Lucy said ‘I have found the project really interesting and enjoyable to produce. I looked at food, car brands, the Berlin wall and produced a glossary of key German words.’

There will now be an assembly on 23rd June in which winners from each class and year group will be announced and receive prizes. Good luck to all students that have taken part!