Team EJS, made up of Year 8 students, Eoin, Jack and Sam, from CTS won the Trust’s Believe Big competition, which tasked students with creating an idea which had the potential to change the world. 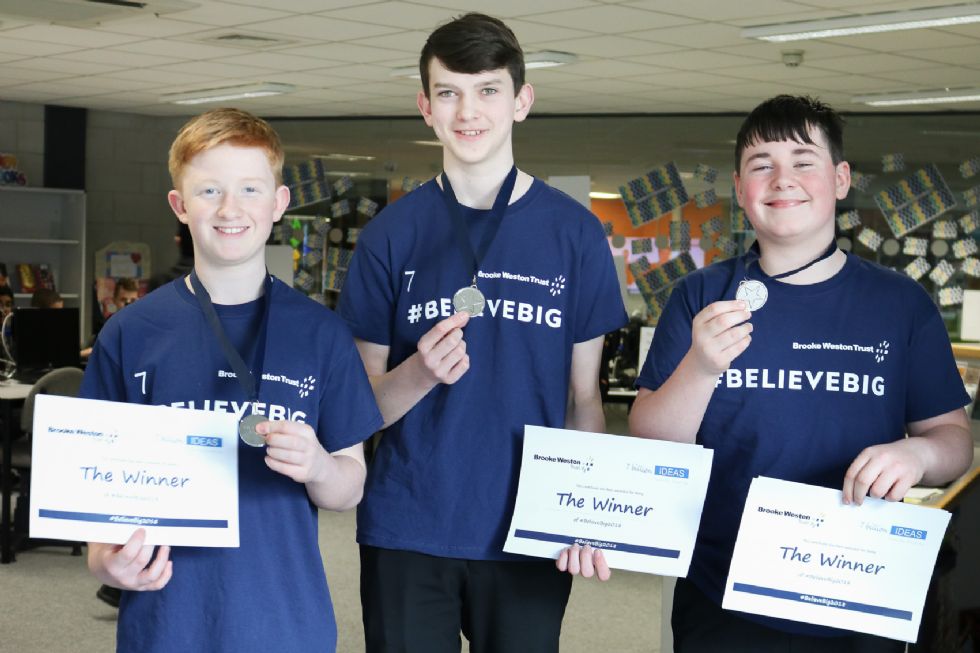 Team EJS, made up of Year 8 students, Eoin, Jack and Sam, from CTS won the Trust’s Believe Big competition, which tasked students with creating an idea which had the potential to change the world.

The Team came up with the innovative solution to combat drink driving. Their idea was to install breathalysers in cars, which would automatically immobilise the vehicle if someone was found over the alcohol limit. The idea even included a mechanism to call a friend or taxi to ensure the person was picked up and taken home safely.

Eoin from EJS said: ‘We came up with the idea when thinking about the negative things that happen in the world. We thought about how many car crashes happen and how many of these are caused by drink driving. Seatbelts and airbags can help in these instances but these accidents could be totally prevented by solving the issue of drink driving. This is how we started to develop the idea of installing breathalysers in cars.

As winners of the competition, the team will now have their idea developed into a children’s book over the next 3-4 months. The book will be sold on Amazon and tell the story of how the students came up with their idea, brought to life by an illustration artist.

Jack from EJS said: ‘It’s really difficult to put into words how we feel. We are shocked and it is still sinking in. We were up against 14 other teams who were selected as the best from their schools. The other groups had some amazing ideas so we weren’t expecting to win.’

‘We have all developed many skills throughout the whole process, especially teamwork. We worked really well together and used each other’s strengths to help us develop our idea.'

Eoin from EJS said: ‘I’ve gained so much confidence. Before this competition I would hate standing up in front of everyone and talking but now I realise it’s really not that bad.’

Other ideas from CTS, which made the finals, included RoboDoc, which would allow people (in particular the elderly and disabled) to access basic medical supplies more easily by installing devices locally, instead of having to travel to the pharmacy.

Homeless Sleep Backpack – a backpack designed for those sleeping rough, included all the essentials such as a torch and special compact bed with pump, which would allow the homeless to sleep elevated and not directly on a cold floor.

The group said ‘We really wanted to help the homeless as a large number of people die during the winter months from hypothermia from having to sleep on a cold floor. The bed in this sleeping bag will stop them getting as cold.’

David Harkin, CEO of 7 Billion Ideas, said: ‘The students have been fantastic. We launched the competition earlier this year and there was so much energy and hard work from the students and the stalls today are world class. The students have gone above and beyond, it is just extraordinary. I don’t think Brooke Weston Trust has got anything to worry about in terms of the next generation of entrepreneurs. We have 15 fantastic ideas in the room and the judges have had an incredibly difficult challenge.’

Announcing the winners Dr Campbell, CEO of the Brooke Weston Trust told the students: ‘What has been genuinely inspirational is the quality of these ideas that could change the world. The ideas were fantastic and what struck me has been the degree to which different people have thought about how they can help others. It is refreshing listening to students talking about things that can help other people rather than themselves. We chose the winner because we could see the idea becoming reality, the way it was developed was personal and it relates to an important safety issue that is relevant to many people.’

Well done to all students who took part in the competition.

Click here to view more photos from the day.

Click here to find out more about the project.