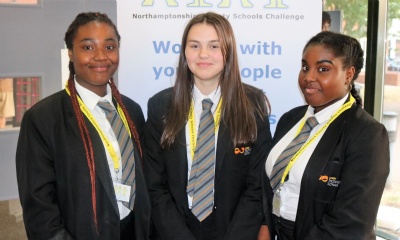 Well done to our team of students whose catchy rap and video to promote road safety won them a place in the final of the Northants County Schools Challenge.

The competition is run by Northants Police and Fire Service and each year they challenge schools to come up with innovative ideas to tackle a topic that is relevant to young people. This year’s focus was on road safety.

Each had the opportunity to question the teams on their products and they had the difficult task of picking the overall winners. Congratulations to Southfield School, Isebrook SEN and Corby Business Academy who were awarded the top three places, with money given to each team to implement their ideas.

The judges commended all their teams for their efforts and said that by getting through to the final stages they were all winners. The focus of next year’s competition will be knife crime.

Vice Principal Linda Arnold said: ‘Our team had a difficult task as they were the first ones on stage. They gave a really positive presentation and their video and song proved really popular.  I think the judges were impressed that it had already got so much coverage on YouTube and local radio. Our team did us proud and were great ambassadors for CTS.’