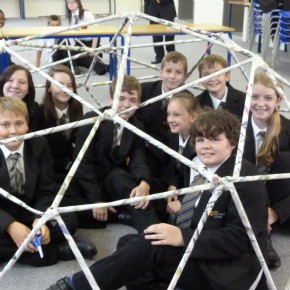 Students learned all about the art of teamwork when they were tasked with building a geodesic shape.

Using the Eden project as inspiration for their build, our students worked in six teams consisting of nine or ten students from the same tutor group.  They were then tasked with creating their own geodesic dome that would stand on its own, following a set of instructions and working independently.   The only building materials that were supplied were newspapers and cellotape.

The project took place on Wednesday 19th Sptember during our weekly STEM session, in which students focus on honing their skills in the areas of Science, Technology, Engineering and Maths.

Director of Science Victoria Khan said: “The task of building a geodesic dome not only required the students to follow instructions carfeully and work independently, but to function as a team, listening to each other and deciding on the best way forward. Students soon realised that accuracy was extremely important with this task, and careful measuring was the key to success. As the session came to a close it became apparent that there was one dome that was superior in build quality to the others."

Team Captain Bartoz Kusio and fellow team mate Natalie Bristow were members of the team that successfully built this dome.

Natalie said: “They key to our success was that we communicated with each other. We worked as a team and everybody supported each other.”