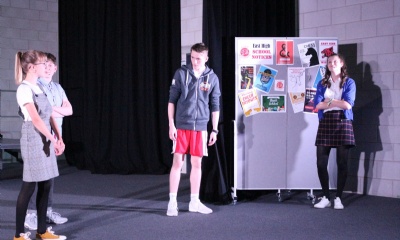 Congratulations to all students who made this year’s production of High School Musical a great success, as well as Drama Teacher Mr Stephen Cox for all his hard work casting and directing the show.

Students from Years 7 to 10 showcased their talents to friends and family when they performed the popular Disney hit musical over two evening performances. The show featured a combination of acting, singing and dancing which the audience got involved in. The performance also dealt with issues such as love, friendship, family and balancing classes with extra curricular activities.

In preparation for the show the students have taken part in two rehearsals a week since October. Mr Cox said: This is the first time we have attempted a musical so that was very exciting and I think it turned out great. The students have worked really hard in rehearsals and had to learn songs and dances as well as their lines. Their hard work and commitment really showed in the brilliant performance they put on and I am really proud of them all. Students also took on other job roles including sound and lighting so a big thanks to them. Thank you also to the teachers who got involved and helped out too and to friends and family who came to see the show.

‘The performance not only creates a real team bond between the students but has also helped to improve their acting skills whilst gaining many transferable skills such as resilience and confidence.’

‘I think this was our best show to date so next year we are going to have to go even bigger and better!’

Please click here to view more photos of the show.